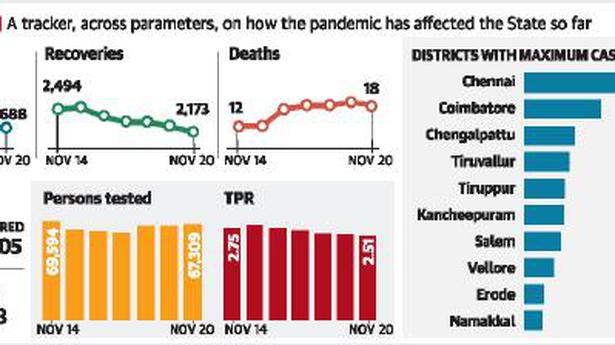 In the last 24 hours, 2,173 persons were discharged after treatment. As many as 7,41,705 persons have been discharged so far, according to public health officials. The State recorded 18 deaths, taking the toll to 11,568.

In Chennai district, 489 fresh cases were reported and 418 persons were discharged. The district also recorded eight deaths. At present, 4,622 persons are under treatment, including those under home treatment. So far, 2,11,084 persons have tested positive in the district. The daily bulletin issued by the Directorate of Public Health said 2,02,660 persons had been discharged and 3,802 had died of the infection so far.

One of the 18 persons whose death was recorded had no co-morbid conditions. The 47-year-old man from Chennai was admitted to Government Medical College, Omandurar Government Estate, on November 15 and tested positive the next day. He died on Thursday morning owing to COVID-19 pneumonia/acute respiratory failure/acute respiratory distress syndrome, according to hospital authorities.

Eleven of the 17 deaths due to the pre-existing complications occurred at private hospitals. The oldest among them was a 90-year-old man from Chengalpattu who had tested positive on November 12. The diabetic patient was admitted to a private hospital in Chennai the next day with complaints of fever and difficulty in breathing for three days. He died on Friday morning, and doctors cited COVID-19 pneumonia as the cause of death.