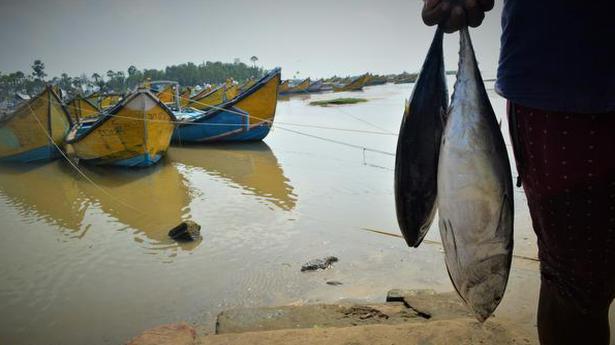 Construction work for A.P. Fisheries University to begin by early next year

Chief Minister Y.S. Jagan Mohan Reddy on Saturday laid foundation virtually for a fishing harbour at Ameenabad in East Godavari district. The harbour construction is targeted to be completed by 2024.

The department has called for tenders for the ₹422 crore-project with 1.10 lakh annual fish handling capacity. It would provide livelihood for nearly 50,000 families in East Godavari district.

In his address, Mr. Reddy said “the State government has released ₹78 crore compensation which was owed by the Gujrat State Petroleum Corporation Limited (GSPC) for the loss of livelihood of fisher folk due to drilling activity along East Godavari coast in 2012. I have released the pending compensation within six months after I assumed the office. The issue was unaddressed since 2012”.

“Above 16,500 fisher folk families from the 68 villages in the eight mandals in the East Godavari district have received the compensation for loss of livelihood due to drilling operation by the GSPC,” he said.

The Chief Minister said the construction of A.P. State Fisheries University would begin by early next year in West Godavari district.

Watch | Medha Patkar and farm leaders stopped by UP Police