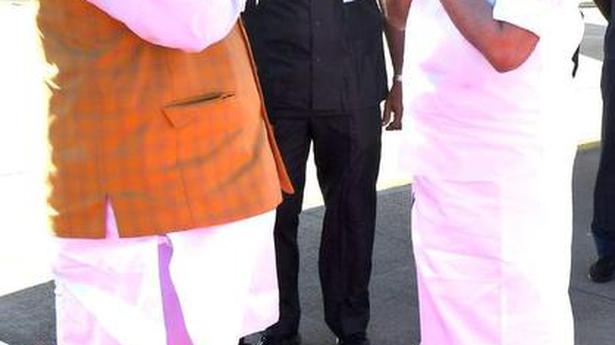 The Union Home Minister, who is on a two-day visit to the city, walked on the road for a brief while, greeting an enthusiastic crowd of party cadre

A rousing welcome was given to Union Home Minister Amit Shah by hundreds of BJP and AIADMK cadres in Chennai when he arrived on a two-day programme to the city, with Chief Minister Edappadi K. Palaniswami, Deputy Chief Minister O. Panneerselvam and Cabinet Ministers receiving him at the airport.

This was perhaps the first time in recent decades where a visiting Union Minister received such a grand reception in Chennai.

The Chief Minister, Deputy Chief Minister and Ministers reached the airport and waited for more than 20 minutes before the arrival of Mr. Shah, who came aboard a special aircraft and landed at the airport at 1.40 p.m. Chief Secretary K. Shanmugam, Director General of Police J.K. Tripathy and BJP leaders including L. Ganesan and L. Murugan were among those who welcomed him.

The police had made elaborate security arrangements on the roads which led to Leela Palace Hotel where Mr. Shah checked in and at Kalaivaanar Arangam, where he is to participate in public programmes organised by the State government. Police personnel were seen standing on the route.

Welcome arches decorated with flowers and fruits were erected at the airport premises. Traffic was stopped on GST Road for passage of the convoy. Later, he was escorted by CRPF Commandos in a bullet-proof vehicle.

Many party men from the BJP and AIADMK gathered on the roadsides, waving party flags and beating drums. Surprised by the unusual reception of enthusiastic party cadres, Mr. Shah stopped his car and got down from the vehicle. He conducted a brief road show, waving his hand to an enthusiastic crowd of party cadres. BJP state president Mr. Murugan walked with him, barefoot.

Suddenly a person who came with a flag with the message ‘Go back Shah’ threw it a few yards away. His act drew criticism from BJP party men and some of them surrounded him and there was a heated exchange of words. Police personnel took him away from the crowd and investigated.

Meanwhile the hashtags #GoBackAmitShah and #TNWelcomesAmitShah were trending on Twitter through the day.

Where Tamil voters will swing the fortune