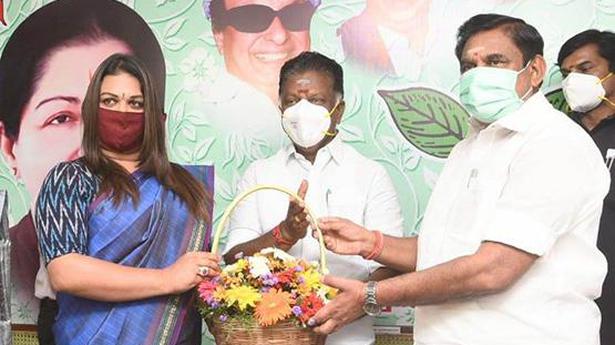 Transgender activist and national general secretary of the women’s wing of the All India Mahila Congress Apsara Reddy on Friday returned to the AIADMK.

The activist, who had been in the BJP too, re-joined the party in the presence of Chief Minister Edappadi K. Palaniswami and Deputy Chief Minister O. Panneerselvam at the party headquarters here.

The AIADMK announced that Janani P. Satishkumar had been made secretary of the Vellore zone of the party’s Information Technology (IT) wing, in the place of M. Kovai Sathyan, who would remain spokesperson of the party.

R. Gopalakrishnan, former Member of Parliament, has been included in the committee for drafting the election manifesto and K. Manickam, Member of the Legislative Assembly, in the panel for the election campaign.

A.P. government to give energy conservation awards for best efforts in industrial, residential and municipal sectors