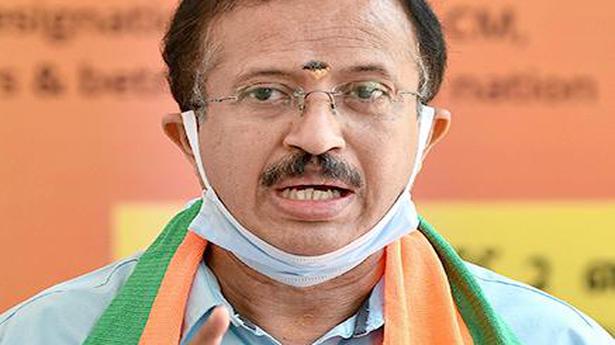 The BJP on Friday demanded the resignation of Kerala Chief Minister Pinarayi Vijayan over the gold smuggling case, alleging that those accused in the case were working in tandem with the ruling dispensation in the State.

The case relates to the seizure of 30 kg of gold from diplomatic baggage at the Thiruvananthapuram airport on July 5.

Mr. Muraleedharan said the Left government’s involvement in hushing up the case was clear by the fact that the State had first asked the Centre to order a probe into the matter and had now moved court against the CBI, claiming that the agency does not have the authority to investigate.

“This shows that those involved in smuggling gold are hand in glove with those in power,” he alleged, adding that this case was distinct from other cases of gold smuggling because it was “directly” linked to the Chief Minister’s Office. He also pointed out that the Principal Secretary to the Chief Minister had been suspended over the case.

“(Chief Minister) Vijayan has been changing his stand on the matter from the day the case was registered and accused were arrested,” Mr. Muraleedharan said.

The NIA, the CBI and the ED are probing various angles of the case and several people have been arrested in connection with the case.

As the virus claimed 112 more lives in the state, the death toll grew to 43,264, it said. The number of coronavirus positive patients...
Read more
Breaking News

The total cases comprise 7.10 lakh discharges from hospitals cumulatively, including 10,106 on Sunday, and 81,050 active cases, including 939 in the ICU. Karnataka...
Read more

Amazon believes Future Group violated the contract by entering into a deal with rival Reliance. Amazon on October 25 won an interim award against...
Read more

Washington: The United States Secretary Mike Pompeo and the US Secretary of Defense Mark T Esper will arrive in New Delhi on Monday (October...
Read more

As the virus claimed 112 more lives in the state, the death toll grew to 43,264, it said. The number of coronavirus positive patients...
Read more
Load more