Home Breaking News ICMR for doing away with home isolation in U.T. 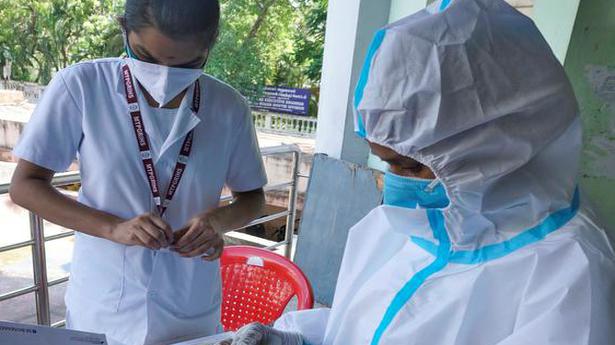 Availability of hospital beds has improved with a consistent decline in caseload in recent days, it says

The ICMR has recommended doing away with the practice of home isolation of COVID-19 patients given the consistently declining caseload in the past several weeks in the Union Territory.

B. Ganesh, scientist with the ICMR-National Institute of Epidemiology, who participated in a review meeting convened by Lt. Governor Kiran Bedi, said as the caseload has waned and adequate beds are available, home isolation may be done away with and all positive cases placed under institutional care in hospitals.

The Lt. Governor said it was decided to treat small gatherings as caution points as they are the spreaders. Intensive testing focused at workplaces would be continued.

Over the course of the day, mobile testing teams deployed for random testing in the community carried out 772 tests across multiple locations, with zero samples testing positive.

To sustain the low positivity rate and prevent the outbreak of a second wave, a checklist of all good practices followed across agencies such as health, police, local administration, rural development, education and PWD will be prepared.

A random mask compliance assessment survey will be carried out shortly. The data would drive a more aggressive public campaign for compliance towards wearing masks. NGOs, local bodies and community participation would be adopted for IEC activities.

The ICMR team, which undertook field visits to PHCs of Abishegapakkam, Mannadipet and Kurusukuppam, reported that the centres were carrying out in-depth investigation of cases. With low active cases, PHCs are able to identify source infection.

However, field officials still encountered resistance among a section of the public in revealing contacts or volunteering for testing. Stringent punitive action against persons who refuse to disclose contacts has been proposed.

Ensuring that random border testing is carried out by the assigned private medical college teams and formulating an SOP for tracing and tracking Sabarimala pilgrims were among other decisions. A Chennai-based developer will collaborate in upgrading the COVID Data Information Portal for linking contact tracing/testing modules.

Meanwhile, Health Minister Malladi Krishna Rao said the post-recovery survey of recovered COVID-19 patients to assess long-term effects was scheduled to be completed by November 25. Already, an estimated 3,542 recovered patients have reported persistence of some or the other problem.

The consolidated report of such patients would be submitted to the Chief Minister to frame a treatment protocol.

A decision will also have to be taken on whether the patients can be treated at a facility in Puducherry or be referred elsewhere, perhaps Chennai, and on meeting the expenses of post-COVID-19 treatment, Mr. Rao said.