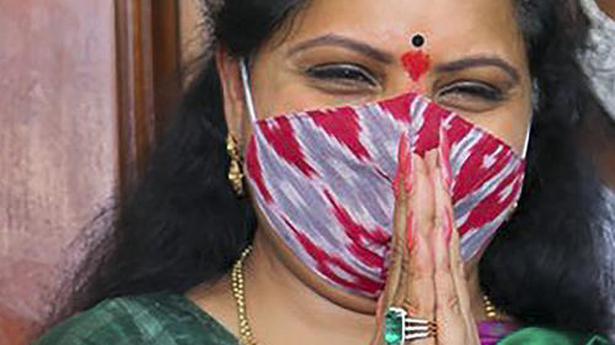 Influential farmers’ organisations in the country and the intelligentsia working for farmers’ welfare are looking at Chief Minister K. Chandrasekhar Rao realising no one understands farmers and agriculture better than him, MLC and KCR’s daughter Kalvakuntla Kavitha argued.

When Mr. KCR talks about bringing political parties on a platform to fight against the Centre, it is not just a new political alignment but a platform where farmers and the workforce of the country will get their issues discussed and debated seriously, she said in an interaction with a select group of journalists here on Friday.

“What KCR has done is unprecedented in the agriculture history of the country whether its Rythu Bandhu (financial assistance to farmers twice every year), regulated farming to reduce losses, buying the produce at farmers’ doorsteps or the irrigation projects constructed in record time. They are noticed by the farmers’ associations and the intelligentsia, who can trigger a huge debate in the country and force political parties to change their strategies for farmers and the agriculture sector,” she said.

“Influential farmers’ associations across the country are evincing keen interest and want Mr. KCR to create the platform. We are getting invites to address their meetings as they see a new dynamic approach taken by the Telangana government to redress farmers issues,” Ms. Kavitha, who is in touch with national level farmers’ associations, said.

“They have realised the positive impact of KCR’s revolutionary idea of hand-holding the farmers at various levels and that the solutions he has shown to the decades-long problems can be implemented across the country.”

Ms. Kavitha argued that people were tired of the Bharatiya Janata Party (BJP) and have seen through their ‘sinister designs’ and are looking at fresh perspective, which she feels KCR can provide. Congress is dying a natural death and its presence is barely felt in the country. So the country needs a leader with fresh ideas and approach to take the country forward as the BJP has failed to deliver.