Mangaluru Dasara gets off to a colourful start 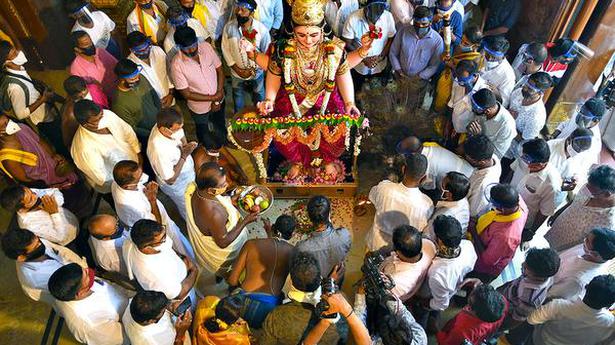 The famed Mangaluru Dasara was off to a colourful start, albeit on a low key, at the Kudroli Gokarnanatha Temple here this morning with former vice-chairperson of the Karnataka NRI Forum Arathi Krishna inaugurating the same.

The first day’s programmes started with Guru Prarthane and other rituals at the temple while Ms. Krishna inaugurated the festivities by lighting the lamp at noon. Nava Durge idols were installed at the temple hall thereafter.

With the COVID-19 pandemic still looming large, the temple’s main architect B. Janardhana Poojari wanted the festivities to be celebrated with absolute precaution,

Temple treasurer R. Padmaraj has said maintaining social distance, wearing masks, and using sanitisers were mandatory for devotees even as children below six years were not allowed inside the premises.

Barricades were erected across the temple premises to ensure devotees move in queues and maintain social distance.

The inauguration of Mangaluru Dasara at Kudroli was followed by performance of traditional Pili Vesha (tiger dance) by a few devotees. The district administration permitted the performance by not more than 10 persons strictly inside the premises of temples .

While temple managements have kept the celebrations as low-key affairs, devotees thronged temples in large numbers on the first day of Navaratri.

Officials of Gokarnanatha Temple, which will organise cultural programmes every evening from 6 p.m., has said no audience would be permitted inside the hall. Instead the programme will be beamed on large screens on the temple premises as well as live on Namma Kudla cable channel.

Many other temples too have been holding cultural programmes in open spaces, including the Dharmasthala temple where the programmes will be held in front of the temple.

When schools closed due to COVID-19 in March and midday meals were stopped, the State government provided dry ration kits till May Lakhs of...
Read more
Breaking News

The recent auction of sites by the Bangalore Development Authority (BDA) saw over 600 sites sold, giving a boost to the cash-strapped agency’s...
Read more

PORTLAND, Maine: The presence of ranked choice voting on the ballot in Maine is a new wrinkle in a state famous for...
Read more
Load more