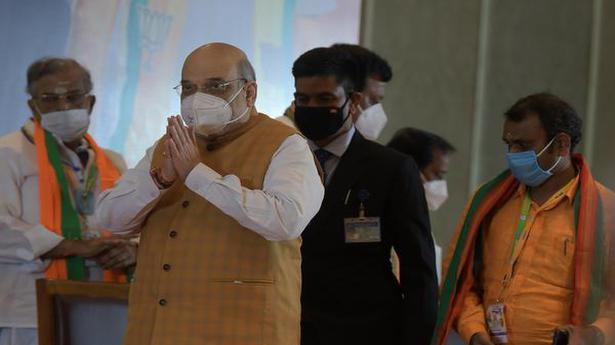 A select list of stories to read before you start your day.

The ruling AIADMK leadership on November 21 declared in the presence of Union Home Minister Amit Shah in Chennai that the party’s alliance with the BJP will continue for the 2021 Assembly elections in Tamil Nadu.

Amid speculation over holding the Winter Session of Parliament in the wake of rising COVID-19 cases in the national capital, Lok Sabha Speaker Om Birla on Saturday said the Lok Sabha secretariat is ready to hold the session and dates are decided by the government.

The Central Bureau of Investigation told the Supreme Court that convict A.G. Perarivalan has nothing to do with the further investigation conducted by its Multi-Disciplinary Monitoring Agency (MDMA) into the “larger conspiracy” behind the assassination of former Prime Minister Rajiv Gandhi in 1991.

Formulating effective laws to counter bio-terrorism is one of the important lessons to be learnt from the COVID-19 pandemic, a Parliamentary Standing Committee on Health has said in a report, “The Outbreak of Pandemic COVID-19 And its Management.” Among other things, the report said low testing and shoddy contact tracing were responsible for the spike in cases.

A three-member Central team met top officials in Gujarat in the wake of a massive surge in coronavirus (COVID-19) infection, forcing the State authorities to impose weekend curfew in Ahmedabad and night curfew in other major cities to contain the pandemic.

Many doctors who have been treating COVID-19 patients in India say that remdesivir is no magic bullet but it may still have its uses. The World Health Organisation has recently been advising against the use of remdesivir, which is listed as experimental therapy for COVID-19 by the Health Ministry.

The U.K. signed an interim trade deal with Canada on Saturday, the second major agreement the country has reached as negotiators hurry to cement trading relationships in preparation for life outside the European Union (EU).

President Donald Trump sought to leverage the power of the Oval Office on Friday in an extraordinary attempt to block President-elect Joe Biden’s victory, but his pleas to Michigan lawmakers to overturn the will of their constituents appeared to have left them unswayed.

Almost two months after the kharif harvest procurement began, the level of paddy procurement is 18% higher than last year, according to Agriculture Ministry data. About 70% of rice procured so far is from Punjab, which is more than the entire procurement from the State last year.

For a development as significant as the end of India’s presence in Tibet, the events surrounding the closure of India’s Consulate General in Lhasa in December 1962 still remain a small footnote in the history of that period, forgotten in the immediate aftermath of the war earlier that year.

The Rajasthan government on Saturday imposed night curfew, between 8 p.m. and 6 a.m., in eight cities with the highest COVID-19 infection and raised the penalty for not wearing face mask at public places from ₹200 to ₹500, after a record 3,007 positive cases were detected on a single day across the State.