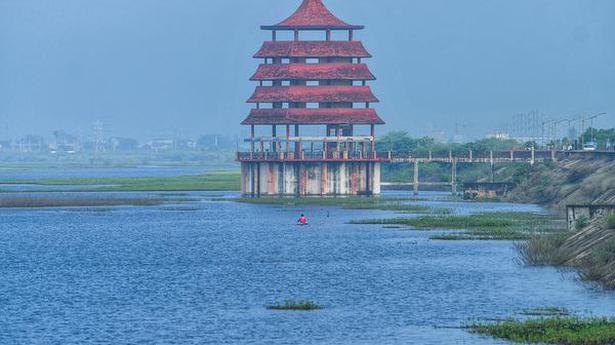 There are no plans to open floodgates of Chembarambakkam reservoir as of now as the inflow into the waterbody dropped on Tuesday morning. It may take another spell of rain for the waterbody to touch its capacity, according to the Water Resources Department.

The WRD plans to continue monitoring the level in the city’s reservoirs to take further decisions on the release of water.

The inflow into Chembarambakkam reservoir dropped to 450 cusecs (cubic feet per second) by 10 a.m. from 1,086 cusecs of rainwater received during the early morning hours and the water level has reached 21.13 feet against its full level of 24 feet.

“We will store water till the level touches 22 feet and then decide on water release after prior warning to areas downstream of the reservoir. However, we need another rainspell for the water level to increase,” said an official.

An inflow of about 1,000 cusecs for another four or five days is needed for the water level to rise. At present, the lake has 2,889 million cubic feet of water against its capacity of 3,231 mcft.

Of the nearly 908 tanks in Kancheepuram and Chengalpattu districts, nearly 68 tanks, including Eraiyur Devaneri and Gunduperumbedu in Sriperumbudur taluk, Sembakkam, Keelkattalai and Selaiyur have reached their full capacity so far. A total of 127 tanks have reached 75 to 90% of their capacity.

Two check dams in Vayalur and Esur Vallipuram across Palar river have surplused due to rains over the past two days and were able to store about 1,000 mcft together.

The two main contributing waterbodies in Pillaipakkam and Sriperumbudur located upstream of Chembarambakkam reservoir too have a storage space of three feet. Other waterbodies upstream that drain surplus into Adyar river too need more rains to fill up, the officials added. There are arrangements to divert a minimal amount of excess water from the Chembarambakkam reservoir to Sikkarayapuram quarries.

Similarly, water released into Kosasthalaiyar river from Ammapalli dam, Krishnapuram village in Andhra Pradesh has also been stopped since Monday. The floodwater did not reach Poondi reservoir.

While water level at Red Hills stands at nearly 17 feet against full level of 21 ft, there is still a buffer space of about 1,800 mcft in Poondi reservoir. Chennai continues to receive Krishna water too from A.P. In Tiruvallur district, only 20%-25% of the water bodies have filled up so far and more rainspells are required for them to touch their capacity, officials added.

Cyclone Nivar: DMDK calls for relief measures on a war-footing