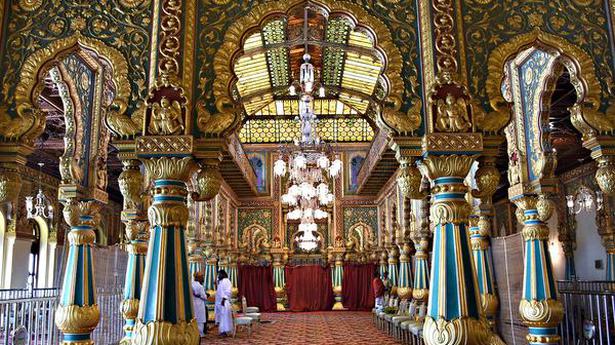 The private Dasara of the Wadiyars to be held from Saturday within the Amba Vilas Palace will be a restricted affair and not open even to immediate family members in view of the pandemic.

The elaborate affair used to start with rites and rituals supervised by priests. It was followed by a private durbar of the Wadiyars, which drew a good number of people, to witness the symbolic ascension of the golden throne. No invitation has been sent out this year.

Palace secretary Lakshminarayan said there will be no one to witness the Khas Durbar this year, though Yaduveer Krishnadatta Chamaraja Wadiyar will perform all the religious rites associated with Navaratri. The rites and rituals used to include a battery of priests to chant the hymns, dharmadhikaris to supervise the proceedings apart from their assistants, but the numbers have been curtailed this year, he said.

The Vajra Mushti Kalaga, a form of wrestling that has gone out of vogue but used to be held on Vijayadashmi, has also been cancelled. The procession of the Wadiyars that used to take place before the Jumboo Savari, will be nothing more than a drive to the temple.

Narasimhan, curator of the Jayachamarajendra Art Gallery, said this is the first time in the last few decades that such restrictions have been introduced, though there have been disruptions. But, various rituals associated with Navaratri will be observed, he added.

The tradition has been passed on by the Vijayanagar rulers and after their decline, it was inherited by the Wadiyars. Raja Wadiyar, who ascended the throne at Srirangapatana in 1610 CE, proclaimed that Navaratri would be be celebrated on a grand scale and provided it royal patronage.

Mr. Lakshminarayan said the practice continued till modern times and Jayachamaraja Wadiyar conducted the last public Dasara in 1969. Then came the disruption when the Government of India abolished the privy purses and privileges to the former rulers in 1970, it was passed in Parliament in 1971 after which the last maharaja restricted Dasara to the palace.

Srikantadatta Narasimharaja Wadiyar resumed the Khas Durbar and other paraphernalia associated with Navaratri a few years later, while there was a people’s movement in the city that led to intervention by the State government, which decided to revive Dasara in 1975, according to Mr. Lakshminarayan.

In recent times, Dasara emerged as a fulcrum to promote tourism. This year, the pandemic has put paid to all plans and the celebrations funded by the government and the tradition observed by the erstwhile royals will be a muted affair.

Will not allow ‘Miya Museum’ in Assam, says BJP