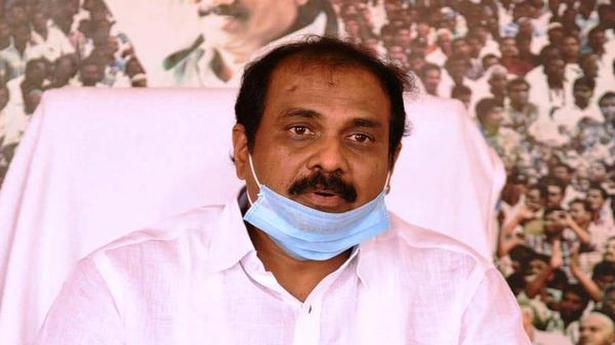 Police on Tuesday foiled an attempt by construction workers to ‘lay siege’ to the residence of Agriculture Minister Kurasala Kannababu in the city, demanding that the State government clear their dues pending with the A.P. Building and Other Construction Workers Board (APBOCW).

The protesters alleged that the APBOCW did not clear their claims for medical expenses, weddings and risk coverage in the event of accidents for nearly two years. Police arrested nearly a hundred protesters while they were proceeding towards Mr. Kannababu’s residence.

AITUC district general secretary Thokala Prasad has said that the State government was preparing to divert the funds of the APBOCW to the corporations which were recently constituted in the State, and such an attempt should be stopped for the welfare of the workers. Protests were also conducted in Amalapuram, Ramachandrapuram and Rajamahendravaram city on Tuesday.

We have been keeping you up-to-date with information on the developments in India and the world that have a bearing on our health and wellbeing, our lives and livelihoods, during these difficult times. To enable wide dissemination of news that is in public interest, we have increased the number of articles that can be read free, and extended free trial periods. However, we have a request for those who can afford to subscribe: please do. As we fight disinformation and misinformation, and keep apace with the happenings, we need to commit greater resources to news gathering operations. We promise to deliver quality journalism that stays away from vested interest and political propaganda.