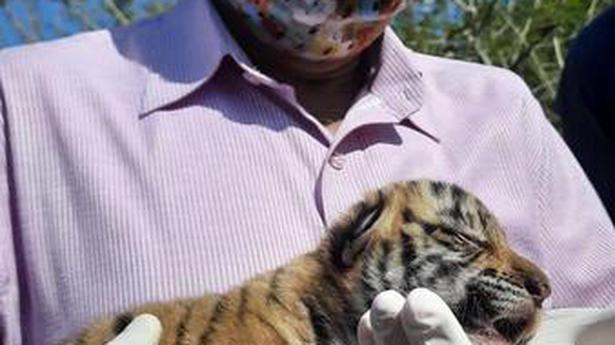 Forest Department officials found an adult tigress dead on Friday evening, and on Saturday, found the cubs nearby

Officials of the Forest Department on Saturday rescued two tiger cubs from the Mudumalai Tiger Reserve (MTR) after their mother was found dead near Achakarai in the Singara Forest Range.

K.K. Kaushal, Field Director of MTR, said the carcass of the tigress was found on Friday evening by Forest Department staff. As it was nearing dusk, a decision was taken to conduct a post-mortem on the carcass on Saturday. “When we reached the spot on Saturday, we heard the cries of two tiger cubs near the carcass,” said Mr. Kaushal. Following this development, the focus quickly shifted to ensuring the survival of the two cubs, who were males.

“We have two options: one is to send them to a zoo or a facility where they will remain captive. However, it has been decided that we will go with a second option, to raise them in-situ at the tiger reserve and slowly reintroduce them back into the wild,” he said.

Mr. Kaushal said that efforts would be taken to minimise the contact the two cubs would have with humans till the time of their release, which will be after they reach two years of age. “We have the expertise to give the two cubs a chance at becoming wild tigers, so we will do our best to make this a reality,” he said.

The circumstances surrounding the death of the adult tigress remain a mystery, with no obvious external signs of injury. Forest Department officials refused to rule out the possibility of the animal being poisoned, and said that only a post-mortem would throw more light on the cause of death. The post-mortem is to be performed by Saturday evening.

Tensions have been high in the area where the tiger was found dead, after a woman was mauled to death during an accidental encounter with a tiger a few months ago.

Following this, five Asiatic wild dogs died after they had fed on the carcass of a wild animal which is suspected to have been poisoned by locals. Till date, no arrests have been made in the case, which activists claim was retaliation by local residents targeted at tigers in the region.

‘Will table Bill on love jihad’