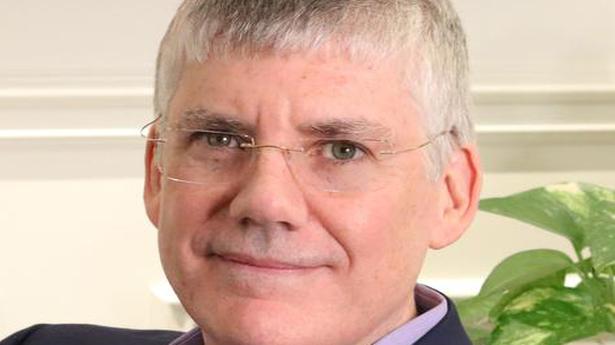 The Trials of Apollo and Percy Jackson and the Olympians author says human beings have the capacity to be great heroes, but can also become the bad guys quite easily

Spotty teenager Lester Papadopoulos, otherwise known as the sun god Apollo, seems all set to regain his godhood in the fifth and final book of The Trials of Apollo series. The recently-released The Tower of Nero (Penguin Random House) by Rick Riordan sees Lester Apollo and his boss, the 12-year-old Meg McCaffrey, daughter of Demeter, take on Nero and Python. The book, like the others in the series, has weird and wonderful creatures including the headgear-obsessed troglodytes and an arrow speaking in Shakespearean English. The haikus for each chapter are fun as always.

The 56-year-old author talks of Apollo’s pop culture references, the research process, Meg’s advice to save the planet, epidemics, the Percy Jackson web series by Disney (yay!) and more in this email interview. Excerpts

Why did you choose to base the series on Apollo rather than any other god in the pantheon?

Apollo actually gave me the idea, since in the original myths he was twice sent down to Earth as a mortal by his father Zeus. I decided that if it could happen twice, there was a precedent. Why not send him down to earth one more time? (Apollo still has not forgiven me for that).

Could you talk of the research process?

I know the myths quite well, of course, but I am always finding new stories, or new twists that I have never heard before. Once I find an idea I like, inspired from the actual myths like the Apollo one, I will read as many versions as I can. I will think about how I want to present the story in a modern setting, what locations I might want to explore, which demigod characters I want to include, what monsters and villains our heroes will fight. It is rather like making a stew. I throw in all the ingredients, stir and let it simmer, and see what comes out.

What are the pros and cons of writing a series?

Writing a series is obviously more complicated because of the size of the story, but it also provides a much larger canvas to paint on. I have to be very sure I want to spend three to five years on one theme when I write a series. It is quite a time commitment.

Could you comment on all the pop cultural references Apollo makes?

Since Apollo is the god of poetry and music, it just made sense that he would keep up with current trends in pop culture. He is always curious about the most popular musicians (and he tends to take credit for all their songs).

Apart from securing the oracles, Lester has to defeat the triumvirate of evil Roman emperors-turned-gods. What is your message based on the triumvirate?

I suppose that the worst villains are often not monsters, but humans. We have to be mindful that humans have the capacity to be great heroes, but we can also become the “bad guys” quite easily, and the villains always believe they are the heroes! As Apollo says at one point, power makes good people uncomfortable, not boastful and gleeful, which is why good people so rarely rise to power. This definitely applies to the Roman emperors in the Trials of Apollo.

What would Meg, as a daughter of Demeter, say we could do to help protect the environment?

Meg is quite no-nonsense. She would probably say, “We’ve only got one planet, dummy. Don’t mess it up!” Alas, humans tend to be very short-sighted and reactive rather than proactive. But we are also resilient and capable of change, so let us hope we can learn not to be dummies!

Who, according to audience response, were some of the most popular characters in the series?

I suppose Percy is obvious. Aside from him, I would say I got the most enthusiastic response about Nico di Angelo and Alex Fierro (from the Magnus Chase series). Different fans have different favourites, though. All the characters have very passionate fan bases!

Whose or which story arc was the most challenging for you to work on in the series?

Probably the Kane Chronicles, based on Egyptian mythology, because we simply don’t have as many sources that have survived from Ancient Egypt. The myths are fragmentary, so I was left with tantalising clues I had to piece together. It was a challenge, but I am so glad I did it.

Do you have another mythology you wish to work on after this?

I would love to explore Irish and other Celtic myths. That is my own ancestral heritage, and the stories are marvellous, though less known than Greek/Roman. So many world mythologies are wonderful, but for most of them, I am not an expert and do not have the cultural background to do a good job. That is why we started the imprint, Rick Riordan Presents in the US, to provide a platform for “own voices” authors to write their own takes on myth and fantasy. Roshani Chokshi, for instance, does a fantastic rendition of the classic Hindu stories, in particular the Mahabharata.

What does Greek mythology say about epidemics?

Most religions have/had gods of medicine and illness. Some have specific gods of plagues. Apollo was one of these. He would rain down arrows of sickness on cities or armies that had displeased him. I think this tells us that humans have always been concerned by plagues, and have always tried to figure out why they happen. These illnesses seem so random, so malevolent, that it is understandable that ancient people would see them as the wrath of a deity. Many of the ways we react to plague haven’t changed much since the ancient times. Avoid crowds, leave the cities, cover your face, keep your distance from the infected and isolate them — these are all measures practised by the Ancient Greeks and other civilisations.

What is the status of the Percy Jackson web series?

It is a slow process, but it is coming along. My wife Becky and I are full producers, which means we will be very involved in every aspect of the show. It will be live action. The first season will cover the first Percy Jackson book, The Lightning Thief. We are in the midst of writing the script for the pilot episode. When the series might come out, and all other details, we just don’t know yet. COVID-19 has slowed everything down: it will be at least a couple of years.

Lockdown weight loss:” I lost over 18 kilos by walking for 45 minutes daily!” | The Times of India

Benefits and Uses of Desi Ghee for Pregnant Women

Perimenopause: Why the Period of Transition to Menopause Needs Care