Home Sports India in Australia | ‘Fab Five’ can hunt down the Aussies: Shastri 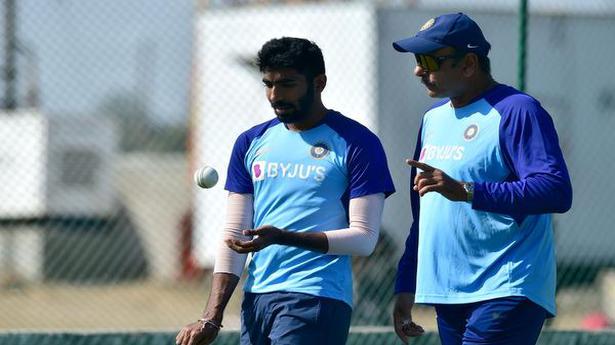 Says Bumrah, Shami, Umesh, Saini and Siraj have the ability to swing it India’s way

Ravi Shastri has been talking tough to his team. “No let up.”

The conditions, as he admitted in this chat on Sunday with Sportstar from his room in Adelaide, are “tough,” but so is the resolve of the Indian team to make a mark this summer in Australia, one of the hardest cricket countries to tour, especially under the current scenario due to the coronavirus pandemic.

The expectations from India are huge. “Nothing wrong. It makes us all the more excited to perform. I know it is going to be tough, but then the monkey is off our back…off the back of the captain (Virat Kohli).”

“We beat Australia here the last time (2018-19) and beat them when they played in India (2016-17). None from this Australian team has the experience of having beaten India in India. We have lost at home to Australia only once in the last 15 years and that was in 2004,” Shastri said.

India was capable of producing sparkling cricket, Shastri felt. “We have a tremendous bowling attack. I know Ishant (Sharma) is not here [yet], but then we have the capacity among the young bowlers to deliver. It is for them to grab the chance and prove that they are second to none.”

When asked to elaborate, Shastri observed: “We have a fabulous five – (Jasprit) Bumrah, (Mohammed) Shami, (Mohammed) Siraj, Umesh (Yadav) and Navdeep Saini. Yadav has the experience. Saini is young and fast. Bumrah is one of the best in the business. Shami is raring to go. Siraj is an exciting prospect. You put up runs on the board and watch these fast bowlers hunt the opposition. They can beat Australia in their own den.”

At the same time, Shastri said that much depended on the surfaces.

“We begin with pink-ball cricket where we lack experience. We have played just one pink-ball Test (against Bangladesh in Kolkata), but there is a qualitative difference between them and Australia. It is like cheese and chalk.”

“We have not played much pink-ball in domestic cricket, but I just want them to go and enjoy their game. We will be having some match fitness for white-ball cricket and [after that] we have to show the willingness to adapt.”

Shastri also backed skipper Kohli on his decision to return home for the birth of his first child.

“It is a once-in-a-lifetime moment and I am with him. He is not the one to miss a game without a compelling reason. But for the quarantine, he would have returned for the last Test.

“But it’s not easy because the quarantine process in Australia is strict and to go through another 14-day period of isolation would be tough for anyone.”

“I must tell our fans and critics that Virat is the only Asian captain to have won a series against Australia both home and away. That’s the trigger for the team to remember and shine.”