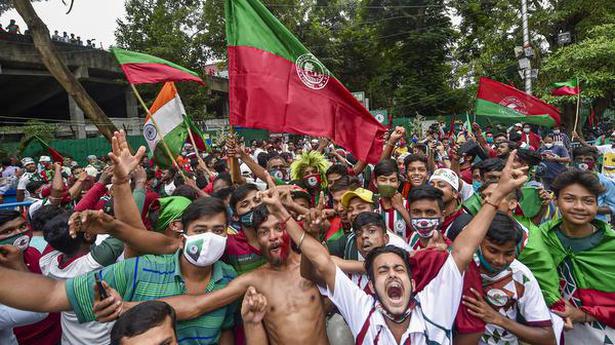 More than 50,000 frenzied fans were seen celebrating on Kolkata’s streets without any visible sign of social distancing norms.

The victory parade following the handing over of I-League trophy to Mohun Bagan on Sunday witnessed gross violation of COVID-19 safety guidelines as more than 50,000 frenzied fans were seen celebrating on the city streets without any visible sign of social distancing norms.

It all began when the victory parade took off from a five-star hotel where the ceremony was held with I-League CEO Sunando Dhar handing over the trophy to some of the players and officials in the presence of club President Swapan Sadhan Bose and West Bengal Sports Minister Aroop Biswas.

The video of the parade was also uploaded on the club’s Twitter handle with caption: “Mad scenes from the Streets of #Kolkata #TrophyTour #JoyMohunBagan #Champion5“.

Incidentally, Union Sports Minister Kiren Rijiju tweeted on the video: “This is that famous festive football frenzy of Kolkata I like the most about! Heartiest congratulations to @Mohun_Bagan for becoming @ILeagueOfficial Champions. My best wishes for the upcoming @IndSuperLeague season as @atkmohunbaganfc“.

Mohun Bagan general secretary Srinjoy Bose said he was “concerned” but to stop the passionate fans from thronging the parade “was not in his hands”.

“I cannot stop the sentiments of hundreds of thousands of supporters. It was about the passion that came out after finally waiting to see the trophy for seven months. I’m concerned but it is not in my hands,” Bose told PTI.

“Can you stop the Durga Puja? Why has the Central Government eased the lockdown restrictions, allowed public transport? Have you seen the crowded buses? Let them stop everything, we will also abide by it. We are helpless.”

“We did not provide them anything to assemble for this procession. It was not in our hands. Fans came on their own and showed their passion,” he added.

The original plan was to hold the ceremony at their club but Mohun Bagan shifted the event to a hotel to adhere to COVID-19 guidelines.

The Mariners had clinched the I-League title on March 10 with four rounds to spare but the celebrations had to wait because of the COVID-19 pandemic that ended the season abruptly.

Mohun Bagan will be seen in the top-tier Indian Super League after their buy-out by reigning champions.

Rajasthan Royals’ star all-rounder Ben Stokes has wished that his match-winning ton brought some happiness to his home where the conditions “are a...
Read more
Sports

Mandeep lost his father a couple of days back and he attended his funeral through video call. Kings Xi Punjab KL Rahul was all...
Read more
Sports

Mandeep Singh and Chris Gayle notched up a half-century each to guide Kings XI Punjab (KXIP) to a crucial eight-wicket victory over Kolkata...
Read more

Maharashtra Deputy Chief Minister Ajit Pawar on Monday announced that he had tested positive for COVID-19. He is the 11th Cabinet minister from...
Read more

Your queries: Mutual Funds – Go for mix of equity and debt to construct MF portfolio

For domestic equity allocation consider a multi-cap fund and for exposure to international equities, a global equity fund which invests across major markets.By...
Read more

Ex-police Chief Not Cooperating With Probe Of Prude’s Death

The court sought the law ministry’s response after going through a statement by the World Health Organisation, which has declared virginity testing as...
Read more