Barack Obama to campaign for Joe Biden and Kamala Harris 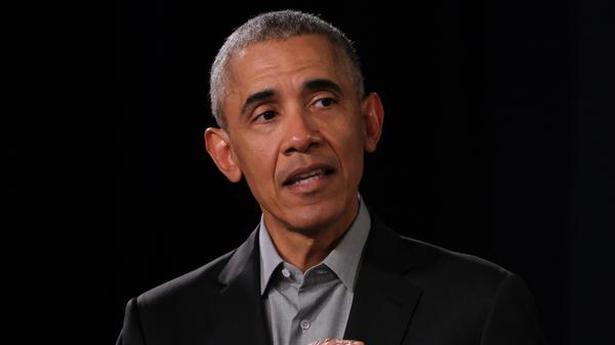 This would be the first time that the 59-year-old former President would be campaigning for them in person.

While Mr. Obama has endorsed Mr. Biden and his running mate and India-origin Senator Kamala Harris by making online campaigns for them, this would be the first time that the 59-year-old former President would be campaigning in person.

Four years after he left the presidency, Mr. Obama because of his oratory skills, still remains the biggest crowd puller for the opposition Democratic party.

“On Wednesday, October 21, (former) president Obama will travel to Philadelphia, Pennsylvania, to campaign on behalf of Joe Biden and Kamala Harris,” the Biden campaign said in a statement on Friday afternoon.

No other details were immediately available.

Mr. Biden, as per the latest opinion polls, leads against Republican incumbent President Donald Trump by over nine points on an average.

However, there are signs that the polls are tightening, especially after Mr. Trump resumed his rallies after recovering from COVID-19. He has been attracting thousands of supporters to his election rallies in the battleground states.

Mr. Obama is the only Democratic leader who can attract a big crowd in his election rallies. His jumping into the campaign, with a little over a fortnight left for the presidential elections, is likely to motivate and encourage Black Americans and fence sitters to come out and vote, Biden strategists believe.

“It highlights the stakes of this election, the importance of Americans voting now to make their voices heard and how they can find all the information they need to make their plan to vote. Millions of Americans are already voting, make sure you stand up and join them,” Obama said in the ad.

“There will always be reasons to think your vote doesn’t matter — that’s not new. What is new is a growing movement for justice, equality and progress on so many issues. This really is a tipping point, and that momentum only continues if we win this election. But it’s gonna be close. It could come down to a handful of voters just like you. So I’m asking you to bring this thing home. Leave no doubt. Vote early,” he said.

During the Democratic National Convention this summer, Mr. Obama had launched a blistering attack against Mr. Trump. “Donald Trump hasn’t grown into the job because he can’t,” he said in August.

“And the consequences of that failure are severe. 170,000 Americans dead. Millions of jobs gone while those at the top take in more than ever. Our worst impulses unleashed, our proud reputation around the world badly diminished, and our democratic institutions threatened like never before,” Mr. Obama said.

Long-term exposure to air pollution may be linked to 15 percent of Covid-19 deaths globally, according to research published Tuesday that highlights the...
Read more
World News

WASHIGNTON: Water on moon could be more easily accessible than previously thought, as NASA on Monday (October 26) said it found traces of...
Read more

Price: (as of - Details) Lux Inferno Men's Round Neck Thermal Top & Bottom Set. Lux Inferno is one the oldest and the...
Read more

Indian Railways to slash land lease rentals, Concor sale to get a leg-up

Railways' LLF policy was originally applicable to land let out for commercial purposes such as opening bookshops, kiosks, etc, but it was extended...
Read more

Abhishek Bachchan denies reports of dad Amitabh Bachchan being hospitalised, says ‘must be his duplicate’

New Delhi: Reports of megastar Amitabh Bachchan being hospitalised after being injured on the sets had created a scare online. However, soon it...
Read more

Bhabiji Ghar Par Hain is one of the most loved and followed comedy shows running on Indian telly at the moment. Even though...
Read more
Load more