The US Presidential Election is just around the corner. As fervent debates between the contesters and their supporters ensue in the nation, people around the world are keen to see who is finally elected – Joe Biden or Donald Trump? Because a President of the United States holds enormous power; being the executive head of the nation, there’s much ado about the process behind election of the coveted position.

What’s more curious is how the US continues to undergo a complex and elongated election process amid a pandemic.

Want to know how a US President is elected, and what bearing Covid-19 has had in the affair till now? News18 explains.

First. let’s talk some dates. While back home, the date of the 2024 Lok Sabha election is not fixed, the date for all Presidential Elections were fixed in US back in 1845. How so, you ask? Set by US law, the election day is always the first Tuesday after the first Monday in November. In 2020, that day is November 3.

But voters don’t technically pick the President that day. The real process begins from months before, with the Presidential Primary elections. Let’s find out more about that.

There are two main parties in the American political system – The Republicans and the Democrats. The Presidential contest is usually between the candidates fronted by both parties. The Republican candidate this time is Donald Trump, who wants to secure another 4-year-term, and Joe Biden is leading the flag for the Democrats.

In India, the people don’t decide the Prime Ministerial candidates for any political parties. But in the US, people do. Once potential candidates have declared their intention to run in the presidential race, citizens decide the final showperson through primaries and caucases.

The Republican and Democratic parties hold primaries and caucuses in each state – which have their own voting laws and proceedures – to decide their presidential candidate.

Both the processes carry out the same task during the summers of a Presidential election – selecting delegates to represent their states at the party’s national convention.

What’s the difference then?

Caucuses are run by political parties.

Primaries are run by the state.

In a Primary election, voters from each party go to a place designated for polling and vote for their preferred candidate or delegate (depending on the proceedure for the particular state).

In a Caucus, a group of regular citizens together discuss and vote on candidates. After the talks are over, a secret headcount is done and delegates are assigned to those candidates who get the most votes.

Once these are over:

Each party’s nominee for President is selected at the National Conventions and the party platform and rules are established. The nominee then chooses a running mate, or the Vice Presidential candidate.

The Pandemic Impact: The process remained the same. But hiccups and delays were frequent. At the time many state primaries were scheduled, the US was braving record Covid-19 cases and deaths. The Alaska and Hawaii Democratic primary moved to vote entirely by mail, and other states like Connecticut and Guam postponed their primaries to later dates.

Georgia witnessed major problems with its voting processes during a primary election as people waited in queues up to eight hours to vote. Election workers struggled with new machines they had not received training for, due to the pandemic.

The pandemic brought new ways of political campaigning and fund-raising to America. While Biden’s campaign conducted virtual fundraisers and gave online space to many of its traditional operations, Trump largely remained fashioned to a time before coronavirus. Biden seen on TV as Trump speaks to news media aboard Air Force One. (Reuters)

Even after Trump tested positive, he was anxious to get out and participate in campaign rallies with massive crowds. The move represents one of the major political bones of contention in this presidential race – the country’s response to coronavirus. 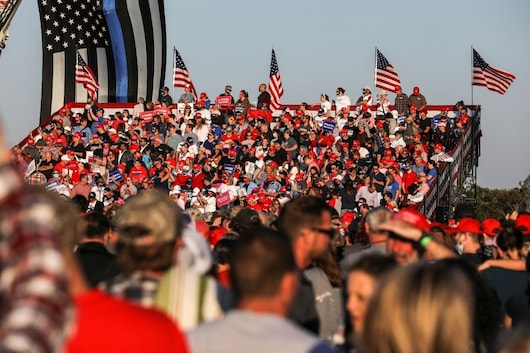 The Popular Vote and the Electoral College

In the US, voters do not directly elect their President. They do so through the Electoral College, which comprises representatives or electors from each state. These electors cast ballots according to the popular vote result. (More on that below).

In 1787, the Electoral College was created as a compromise between electing the US President by a vote in Congress, or electing them through a popular vote by qualified citizens. It’s also a checks and balances system, which ensures that candidates receive a spread of votes from across the country.

Since 1964, there have been 538 electors in each election. The number of electors is equal to the total voting membership of the US States Congress.

In a popular vote, registered citizens go to the polls to decide who will get their states’ electoral votes. But, electors can also deflect from their pledged vote.

Since 1804, four presidents have been elected who did not win the popular vote. Donald Trump was one of them.

The Pandemic Impact: There’s more postal voting. This includes Absentee ballot and mail-in ballots. In postal voting, ballot papers are distributed to electors and these are returned via post, typically postmarked before or on November 3. Ballots pictured in the US. (Reuters)

An absentee ballot is one used by an absentee voter – someone who cannot physically be present at a voting centre on Election Day. It is done usually by mail.

Due to Covid-19, more and more people are applying for mail-in ballots. Donald Trump has raised his concern about the safety and security of the process. But a number of Americans prefer the method, with the US having lost 220,000 lives till now to the pandemic.

More postal voting means the counting of said votes may take longer than usual, as well.